Q: You and Callie Collins started A Strange Object shortly after it was announced that American Short Fiction was closing its doors. What was the impetus to start publishing books instead of moving to another journal or publishing house?

A: At the magazine, we loved collaborating with writers and publishing some of the best fiction in America. That was great work—some of the most rewarding work I know—and so we aimed to continue doing it.

But we were looking for a way to deepen our relationship to the work and the writers (and give ourselves some new challenges as well). And books—in print or digital form—require that sustained attention and effort.

Besides, Austin has many fine magazines already (Unstuck and Foxing Quarterly among them). It’s a little underrepresented in the press category.

Q: Have you picked the debut release(s) for ASO yet? Can you share any info about your fall catalog?

A: Yes! Our first book is Kelly Luce’s debut collection Three Scenarios in Which Hana Sasaki Grows a Tail, which will be published October 1. The stories examine the power of memory and often swivel into the fantastical. They’re set in Japan, and they’re playful and enigmatic (Haruki Murakami comes to mind).

Our second book is photographer Nicholas Grider’s Misadventure, out in January. It’s a darker, more bracing book. His stories wrestle with the complexities of obsession and control; they play with form and structure and challenge the typical queer narrative.

Those two will be published in print and ebook formats; we’re also preparing some digital-only projects for a fall launch.

Q: Usually editors tend to say “the best way to get an idea of our aesthetic is to read the work we’ve published.” But since your debut release is still pending, how would you describe ASO’s aesthetic?

A: Callie and I are looking for fiction that is risky and heartfelt and engaged with doing something new. Something that forges a circuit between your heart and your brain. Personally, I’m deeply interested in the uncanny: novels and collections that can “make the strange familiar, and the familiar strange.”

Q: You edited American Short Fiction, first as a managing editor under Stacey Swann, then as editor-in-chief, with Callie Collins at your side, for several years. I know it’s not fair to ask you to pick your favorite story you published, but what were one or two of the stories that you were proudest to share with the world and why?

A: They were all my favorites.

OK, then. The opening of Ethan Rutherford’s “Peripatetic Coffin” gave me the biggest rush. It’s such an incredible, bold, incantatory opening—to a nuanced story about war. But it’s the Civil War and there are death-trap submarines! (Please go pick up his collection. It’s out May 7.)

Paul Yoon’s stories work on you like a delicious, slow-descending spell. Lucy Corin’s “Madmen” was absolutely revelatory. (You can read it here.) Josh Weil’s “The First Bad Thing”—well, it’s a sexy road-trip narrative that’s set in a dystopian future, what’s not to love there?

Oh, there are too many.

Q: What’s the best thing about being an editor (besides all the money and coke)?

A: It’s really two things; they are twinned. Or cousinned, maybe.

First: the moment of falling in love with a great new voice—that shiver of discovery, or hearing “the click of a well-made box.”

Then: the conversation with the writer, the exchange, about details and vision—the effort to bring the work to its best-yet incarnation.

Big publishing houses obviously hold the monetary and distributing advantages over indie houses, but what advantages do the indies hold over the mainstream?

Indies can make riskier choices and commit to their authors in a bigger way. They also know where the dive bars are.

Q: I heard you and Callie were recently on the cover of the Austin Chronicle smashing an e-reader. That’s not really  a question—it just sounds awesome.

A: It was awesome, until the Kindle started leaking some strange fluid.

Q: This is the portion of the interview where we encourage you to talk shit about a person, place, or thing of your choosing. Go.

A: The Pulitzer board is just ridiculous. Not choosing a fiction winner, come on. Think of the missed opportunity there, and to suggest there’s something wrong with fiction—oh, what’s that? Adam Johnson? Oh.

Q: If you had your druthers, what would people be saying about A Strange Object three years from now?

A: That it’s one of the most innovative and consistent small presses around—and that we publish compulsively readable collections, novels, and odd, stirring, hard-to-characterize nonfiction. That our editing is impeccable. And that we look stunning in Google Glass.

Q: Who’s cuter: Your dachshund or a box full of kittens playing with mittens?

A: I can’t believe this is even up for debate. Please see Exhibit A. Emmet’s cuteness is undeniable. 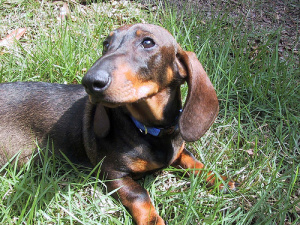