The Eldritch Creation: A monthly column on cult films and great literature

Volume 1: Barton Fink and The Trial

The Toxic Avenger (1984), This Island Earth (1955), and Death Bed: The Bed That Eats (1977) are all films devoid of cinematic merit in eyes of the Academy of Arts and Sciences, Hollywood Foreign Press Association, Cahiers du Cinéma, and, really, most people who watch movies. But they are not at all devoid of entertainment or pure gory joy. These are the films of B-lists, Razzies, bottom shelves, dark rooms, and secret screenings across America. On the other side of the spectrum are cult films—what J. Hoberman and Jonathan Rosenbaum call “midnight movies”—which have been whispered about in coffeehouses and lauded in Variety. Films like The Holy Mountain (1973), Eraserhead (1977), and Night of the Living Dead (1968) are more popular and acceptable among the upper crusty cult film lists. Relevant as they are, there is a much bigger world of B-movie culture to dive into.

Like Barton Fink (1991), directed by The Coen Brothers. In Barton Fink (the title character being played by John Turturro) our protagonist’s initial integration into the world of Hollywood is a strange one. He enters the Hotel Earle to be greeted by Chet (Steve Buscemi) who rises from a mysteriously fire red basement. The hotel is completely empty and Barton looks like the only tenant in the Hotel Earle, where their motto is “A day or a lifetime.” Fink’s isolation is quite reminiscent of Josef K’s entry and initial visit to the courts in Kafka’s The Trial. Josef K walks down a peculiar part of town in which he has never been. Kafka writes: “when he stood at the street’s entrance it consisted on each side of almost nothing but monotonous, grey constructions, tall blocks of flats oc­cupied by poor people.” The stark contrast of greys and blacks compared to the vastness and repetitive patterns of the Hotel Earle poses the question: Are Barton Fink and Josef K. already dead? Are they in purgatory?

Both characters struggle to get answers throughout their respective journeys, and when they find some normalcy, it is only a moment before either they discover a dead body or are told a parable about a man standing before a giant door. Their inability to move forward is reflective of the artist’s struggle. Whether it’s Fink’s “writer’s block” or K’s inability to fight the judicial system of Prague in the 1920s, both characters are stuck in a nightmarish purgatory. 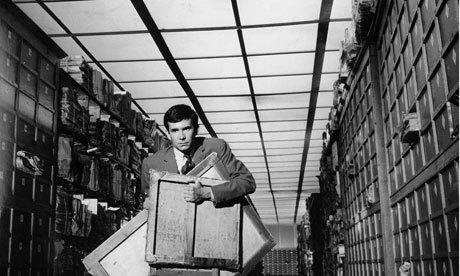 Waiting is a theme in both works. Barton and Josef always seem to be waiting for something to happen to them rather than making something happen themselves. It takes a brutal murder to force Barton to write his script, and Josef needs an ambiguous parable from a priest to push his drive to understand what his crime is and why the courts are throwing him around. Both protagonists teach a valuable lesson on waiting. It’s bullshit. Action allows for the possibility of growth rather than just “Sitting and wishing and hoping and praying,” as Dusty Springfield once sang.

Barton constantly tells the studio executives, “Well, to tell you the truth, I’m having some trouble getting started.” Josef is constantly told, “That is not allowed.” Both are unable to move forward. Josef and Barton have been put into a bubble where the god that controls them decides where they can go, what they can do, and if they’re allowed to live on at all.

In both Barton Fink and The Trial the protagonist is a bit of a pushover who must first be taken completely out of his element and then forced to make a decision how their end will be determined. This quote from The Trial applies to both: “Logic may indeed be unshakeable, but it cannot withstand a man who is determined to live.”

5 Movies That Do Their Books (or Plays) JusticeIn "5 Things"

5 Things You Should Read (Blackwell)In "5 Things"